This is a wonderful milestone to reach and would not be possible without the commitment and passion of everyone who attends our talks, reads about our campaign and pledges to make a difference to the lives of people living with dementia and their carers.
The team have been taking the ‘You Can Make a Difference’ campaign to 650 talks to date, reaching over 85,000 staff and students throughout the UK to highlight that no matter what their role, everyone working in Health and Social Care Services has the potential to transform the lives and experiences of people with dementia and their carers, often in seemingly small ways.
You can read all the 15,000 pledges on our master pledge page and see our ‘You Can Make a Difference’case studies.

UK Project Lead, Tommy Whitelaw speaks at Northern Irish Assembly
Dementia carer Voices UK Project Lead, Tommy Whitelaw, spoke at the Northern Irish Assembly in Stormont, Belfast on the 13th September. He gave a presentation at the ‘Caring for Carers’ conference, which was organised by the Patient and Client Council and the Health and Social Care Trusts of Northern Ireland. Tommy spoke to an audience of assembly members, carers of people with dementia and people from the Northern Irish Third Sector about challenges faced by carers in Northern Ireland and across the UK, in the context of an aging population and financial challenges.

Make a Difference talks across Universities and Colleges – the class of 2017
Dementia Carer Voices has embarked on a series of presentations and events engaging with first year health and social care students across Scotland’s universities and colleges.
UK Project Lead, Tommy Whitelaw, has spoken at UWS Ayr and Hamilton, Stirling University and West Lothian College so far this term and will engage with students at Robert Gordon University, Napier, City College Glasgow and many more during this autumn. See the full list of presentations and events on the DCV blog.
Tommy has been joined at several of the talks by the Chief Nursing Officer for Scotland, Fiona McQueen and Shaun Maher, Strategic Advisor for Improvement and Person-Centred Care at the Scottish Government to share the key messages from the CNO and Scottish Government alongside DCV.

Speaking at the Plenary session of the European Economic and Social Committee (the EESC) in Brussel, Irene Oldfather said:
“As we consider how Europe connects to marginalised people it would be remiss of us not to recognise the opportunity that World Alzheimer’s Day provides to acknowledge that over six million of Europe’s citizens live every day with dementia. They deserve and expect us to work together, across boundaries to ensure that their voice is heard loud and clear.”

Tommy`s presentation focused on the pledges, the tools being used in Scotland, the new publication and reflected on Healthcare Improvement Scotland`s values, which are:
Thank you to the Focus on Dementia Team and the wider Healthcare Improvement Scotland colleagues for their support. Dementia Carer Voices looks forward to watching the pledge trees grow.

Many people with a diagnosis of dementia fear that they will no longer be socially welcome, and stop taking part in activities they enjoy. The Movie Memories programme looks to address this with inclusive and friendly screenings, dementia friendly venue and dementia aware staff and volunteers. People living with dementia will also play a central role in how the project develops. Movie Memories will present classic and contemporary film screenings alongside a programme of multi-arts entertainment based at GFT, with events planned for select other venues.

The Movie Memories programme will launch with a special screening of the 1949 Ealing classic Whisky Galore! at GFT on Thursday 19 October in partnership with Luminate, Scotland’s creative ageing festival.

Dementia Carer Voices Western Isles Tour Day 6 – back to visit
UK Project Lead, Tommy Whitelaw was invited by NHS Western Isles to give two talks at Stornoway Hospital. This is part of our development and partnership work with Chief Nursing Office Directorate work.
Back in June Tommy toured the Western Isles for five days. On 30th August he had another brilliant day at the two talks. It was a great honour to meet a wide variety of people playing a part in the hospital and seeing their Pledge Tree grow.

Dementia Care Voices looks forward to returning this December or early January next year for more talks and meeting more remarkable people who make a difference every day.

Dementia Carers Voices Launches Make a Difference across Jersey
Dementia Carer Voices UK Project Lead, Tommy Whitelaw held a series of talks and events in Jersey on the 19 – 22 September to launch our #makeadifference Pledge work on the island. Among many other talks and events, Tommy spoke at the Jersey Alzheimer’s Association and Royal College of Nursing’s (RCN) conference on dementia on Thursday 21 September – “Aspiring to Excellence in Jersey”.

Tommy was honoured to be invited to give the keynote address at this conference. The talks are aimed at raising awareness for people with dementia and their carers. The tour programme highlighted the role of carers as experts and how they should be recognised for the value that they bring to the life of their loved ones and society.

Many thanks for a kind donation!
A big thanks to Tommy’s Aunty Margaret Gormal, Sarah, Elaine, family and friends for their kind donation to Dementia Carer Voices in memory of Tommy’s uncle Joe.

We are very grateful for this kind donation!

News in brief
September has been a busy month for the DCV Team, so we have put together a wee news in brief section covering other news stories. Please click on the links below for more information on each of the stories.

15,000 People Have Now Personally Pledged. Every Person Every Pledge is Here

we would like to say a   huge thank you to everyone who has made a pledge as part of the ‘You Can Make a Difference’ campaign and we are absolutely delighted to have received  over 15,000 pledges!
This is a wonderful milestone to reach and would not be possible without the commitment and passion of everyone who attends our talks, reads about our campaign and pledges to make a difference to the lives of people with living with dementia and their carers.

The team have been taking the ‘You Can Make a Difference’ campaign to 650 talks to date, reaching over 85,000 staff and students throughout the UK to highlight that no matter what their role, everyone working in Health and Social Care Services has the potential to transform the lives and experiences of people with dementia and their carers, often in seemingly small ways.
You can read all the 15,000 pledges on our master pledge page and see our ‘You Can Make a Difference’case studies.
In June, Dementia Carer Voices launched its publication analysing 6,000 of the pledges we have received in the three years running the project. The key messages were around the importance of time in delivering compassionate care for health and social care staff and students.

If you have been inspired to make a pledge , please get in touch and email us your pledge at dementiacarervoices@alliance-scotland.org.uk. If you have made a pledge and want to share how you have made a difference and put a pledge do get in touch. Get inspiration on our ‘What Matters to You?’ case studies.
The campaign continues into 2017 and beyond – this autumn we will be visiting all universities offering nursing courses to share our important message.

Every Person Every Pledge Below 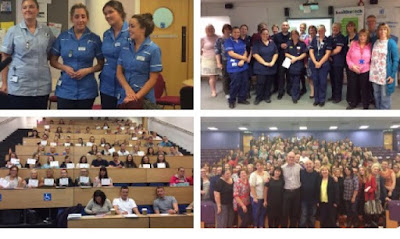