Last week myself and the team Irene ,Laura ,Sarah from Dementia Carer Vocies had an exhibition at the Scottish Parlaiment on my 'You Can Make A Difference ' Tour - Campaign and the wider Project
Hosted at the ALLIANCE Scotland

Thank you for sitting in our house 4 weeks to the day before my mum passed away and holding my mums hand a very  private visit from a daughter to sit with a mum and son
I will never forget the kindness, I will never forget my mum counting to five as you held mums hand

Thank you Nicola such kindness thank you for caring

Every single pledge that’s made adds up to a transformation in how we care for people with dementia and the people who care for them.

Meeting you (Tommy) changed my life and meeting your mum was one of the most special moments of my life – and as long as I’m in politics and as long as I’ve got any influence in government, my pledge is to help people who are working so hard to make life better for people with dementia.

Working in this area has shown me that it’s the small things that add up to the big things and if we all make a pledge to do something small, then that will transform the way that people with dementia live and the support that we give to people who care for them – and that is so important. 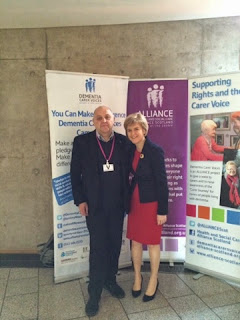 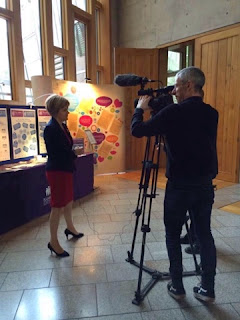 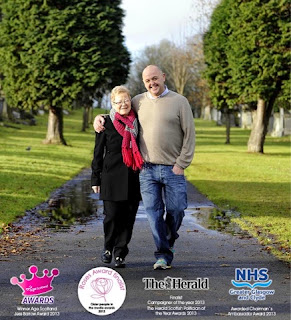 Taken From our pledge site
We launched the ‘You Can Make a Difference’ Campaign in February of this year and it has been so inspiring to see it grow. Tommy Whitelaw has given over 100 talks already this year, with 170 scheduled in total, and we wanted to really thank those who have gotten involved and made it all possible. The talks involve  Tommy sharing his own personal experiences from caring and the experiences of others who have written to him since he went on tour in 2011, to help people understand some of the issues that carers face, and what we can all do to help overcome these issues.
The campaign  has really shown the difference that every single person can make, no matter how small it may seem. This has been through asking people to reflect on carers experiences, and tomake a pledge about one key action they could take to really have a positive impact in the lives of others. Some of the pledges have been about a simple change in attitude such as “I pledge to listen with open ears and open heart.” This type of change is one that we can all implement in our own lives, no matter who we are, where we live, or what we do.

The interactions that we have with people can be vast and varied. They can also be short and infrequent, and more often than we realise, the occasional conversation can be the only interaction people have with someone in their community. There is an abundance of research which shows that isolation leads to poorer health and wellbeing, but on a basic human level, it is simply wrong that people feel so alone. Time and time again, carers tell us that a little bit of time, listening and understanding can make an unimaginable difference during what can be a very difficult and lonely journey.  With this in mind, we would like to encourage everyone to reflect about what they could do to help, and to make a difference.
If you would like to make your own pledge, we would really love to hear about it! Please send us your pledge via email to makeadifference@alliance-scotland.org.uk or tweet us@dementiacarervo. Let’s make a difference!

Thank you for leaving a comment at the tommyontour blog. Your comment will be moderated and published very soon.


Please watch my short film, which includes families and carers reading from the letters they sent me. >